In 1760, the American printer, Benjamin Franklin wrote to John Baskerville and paid him a visit.

Baskerville’s reputation, and even his eponymous typeface, had been maligned by “gentlemen” who may have been jealous of Baskerville’s talent, nonconformism, and increasing success. Baskerville used excerpts from one of Franklin’s letters as an “unsolicited testimonial“ in advertisements, but typographers will appreciate how clever Franklin was in his support of Baskerville: 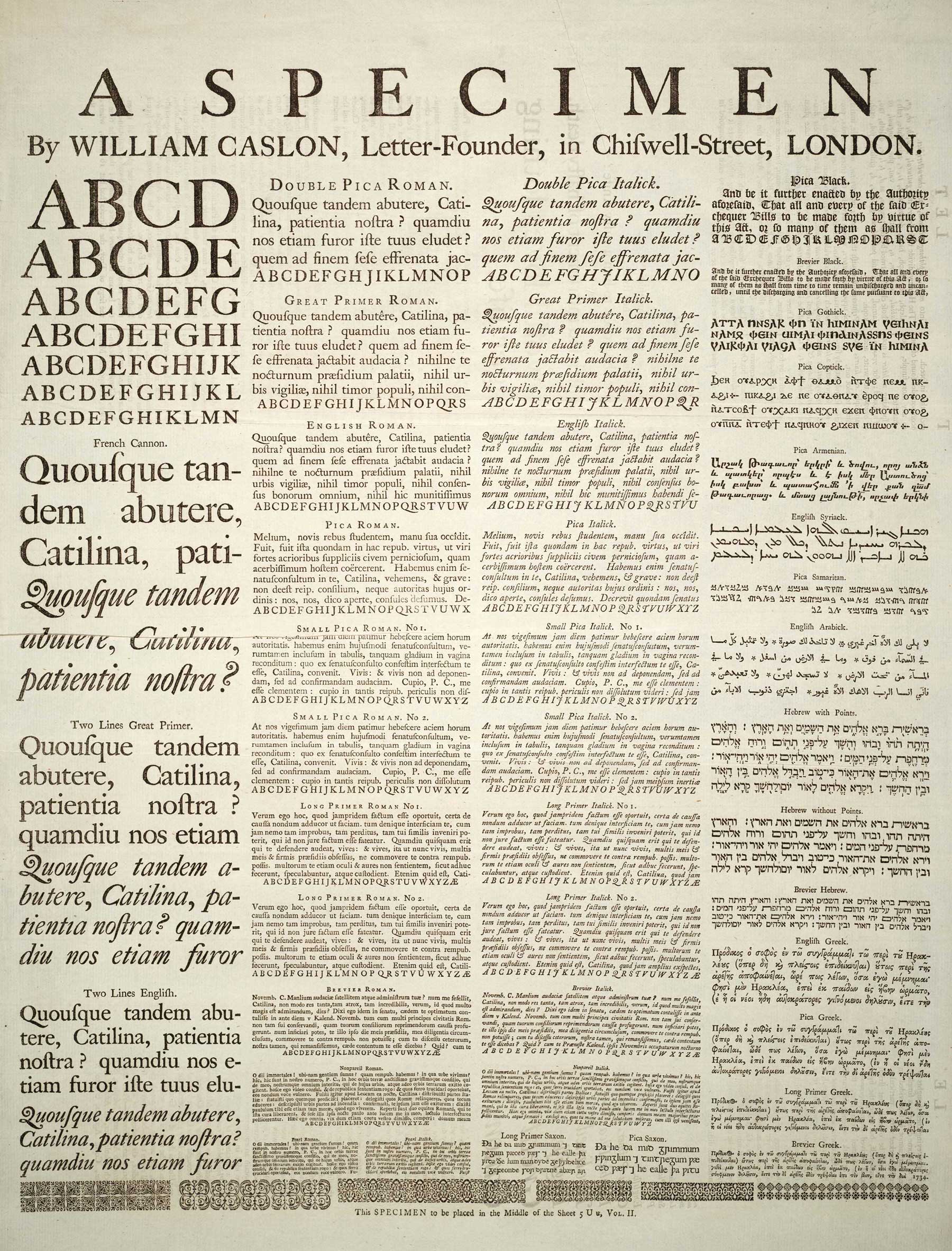 “I stept into my Closet, tore off the top of Mr. Caslon’s Specimen, and produced it to him as yours…”

“Dear Sir, Let me give you a pleasant Instance of the Prejudice some have entertained against your Work. Soon after I returned, discoursing with a Gentleman concerning the Artists of Birmingham, he said you would be a Means of blinding all the Readers in the Nation; for the Strokes of your Letters, being too thin and narrow, hurt the Eye, and he could never read a Line of them without Pain. I thought, said I, you were going to complain of the Gloss on the Paper, some object to. No, no, says he, I have heard that mentioned; but it is not that—it is in the Form and Cut of the Letters themselves: They have not that natural and easy Proportion between the Height and Thickness of the Stroke which makes the common Printing so much the more comfortable to the Eye.— You see this Gentleman was a Connoisseur. In vain I endeavoured to support your Character against the Charge: He knew what he felt, and could see the Reason of it, and several other Gentlemen among his Friends had made the same Observation, &c.— Yesterday he called to visit me, when, mischievously bent to try his Judgment, I stept into my Closet, tore off the top of Mr. Caslon’s Specimen, and produced it to him as yours brought with me from Birmingham, saying, I had been examining it since he spoke to me, and could not for my Life perceive the Disproportion he mentioned, desiring him to point it out to me. He readily undertook it, and went over the several Founts, showing me every where what he thought Instances of that Disproportion; and declared, that he could not then read the Specimen without feeling very strongly the Pain he had mentioned to me. I spared him that Time the Confusion of being told, that these were the Types he had been reading all his Life with so much Ease to his Eyes; the Types his adored Newton is printed with, on which he has pored not a little; nay, the very Types his own Book is printed with, for he is himself an Author, and yet never discovered this painful Disproportion in them, till he thought they were yours.
I am, &c.”

The Rambler was a twopenny* sheet issued twice weekly in London between 1750 and 1752, each issue was a single anonymous essay. 208 periodical essays appeared, all but four written by Samuel Johnson. Dr. Johnson’s incentive in contributing Rambler essays was to pay the bills (“No man but a blockhead ever wrote except for money”) while he was at work on his great Dictionary. He was paid two guineas (£) for each essay in the paper. The Rambler did not sell well as a periodical, but the essays sold well later when reissued, revised and collected into book form. You can even find it online today.

We picked up an original issue (#25) in periodical form and it is now framed and hanging in the office. The epigraph, “Possunt quia posse videntur,” means, “they are able because they seem to be able,” meaning If you believe you can do a thing, you can (and conversely, if you believe you cannot do a thing, you cannot). It was likely not the only time that Johnson pondered this aphorism while laboring on his monumental dictionary. This piece makes full use of the long ‘s,’ which is now archaic, and by the end of the eighteenth century had largely disappeared.

Thanks to the late John Louis Worden Jr. Ph.D, who retired from California State University, Chico, in 1983, for preserving this rare specimen.

*In Britain, the old symbol for the penny, as seen in the image, was ‘d,’ from the Latin denarius.

Perforated window vinyl has an image/graphic that is printed directly onto perforated, adhesive vinyl material, allowing people to see outside from within. The only thing visible from outside during daylight hours is your message.

This is made possible by puncturing 50% of the vinyl with holes holes small enough for the decal to maintain a high-quality image on one side yet be see-through on the other side. 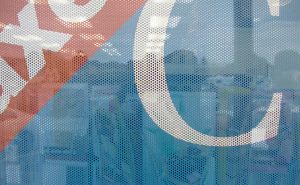 One Way See-Thru Window Film:
• See out and let light in, while advertising to the outside
• Good for indoor and outdoor use
• Business/storefront advertising and product promotion
• Branding or decoration
• Diffuse sunlight, provide shade and privacy 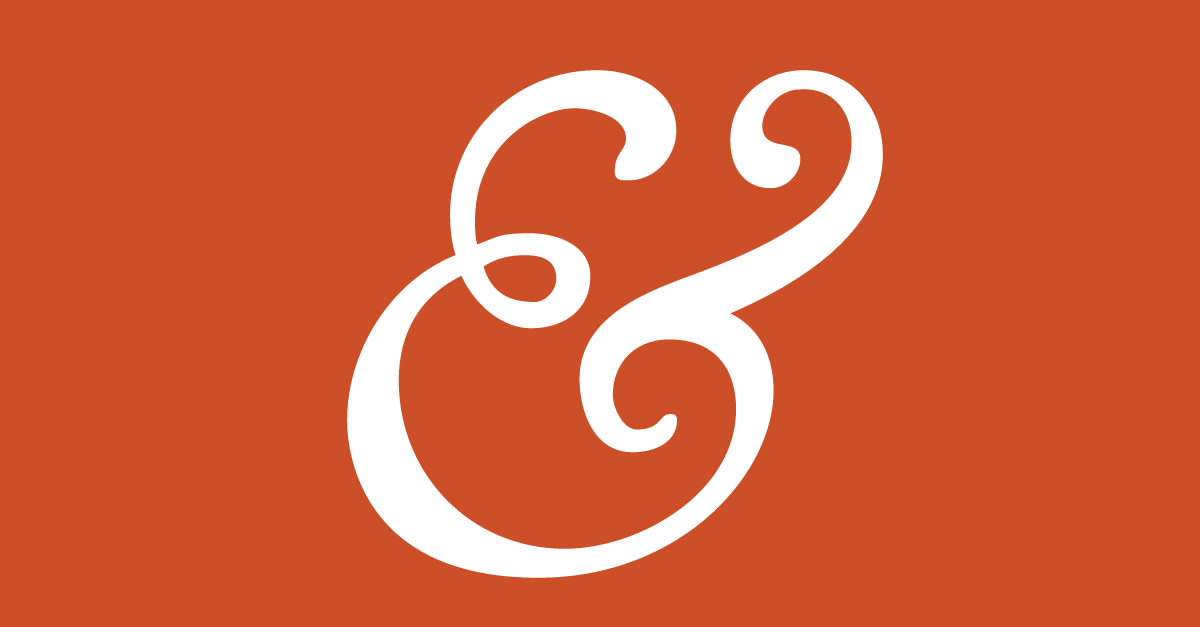 The ampersand has been with us perhaps since the first century CE in one form or another. It’s a conjoining of the e and t, forming the Latin et, which means “and.” You can still make out both letters in even the most abstract designs since typographers know that the ampersand is a ligature and design it as such. Because ampersands are so highly stylized, they can add verve to even the stodgiest of typefaces. 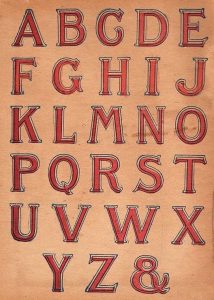 Pre-Victorian alphabets included the ampersand as the 27th letter.

Designers, take note: as Robert Bringhurst has written, the italic versions of ampersands are less restrained than their roman counterparts. “Since the ampersand is more often used in display work than in ordinary text…there is rarely any reason not to borrow the italic ampersand for use with roman text.” An italic ampersand can bring verve, and a completed appearance, to even the stodgiest logo—like a colorful necktie.

Etymology: Pre-Victorian grammar schools included the ampersand as the last letter of the alphabet. Children ended recitations of the alphabet with “x, y, z and, per se, and” which through rote repetition became the garbled “ampersand.”

The ampersand is still used as a letter in “&c,” a widely-accepted abbreviation of et cetera. 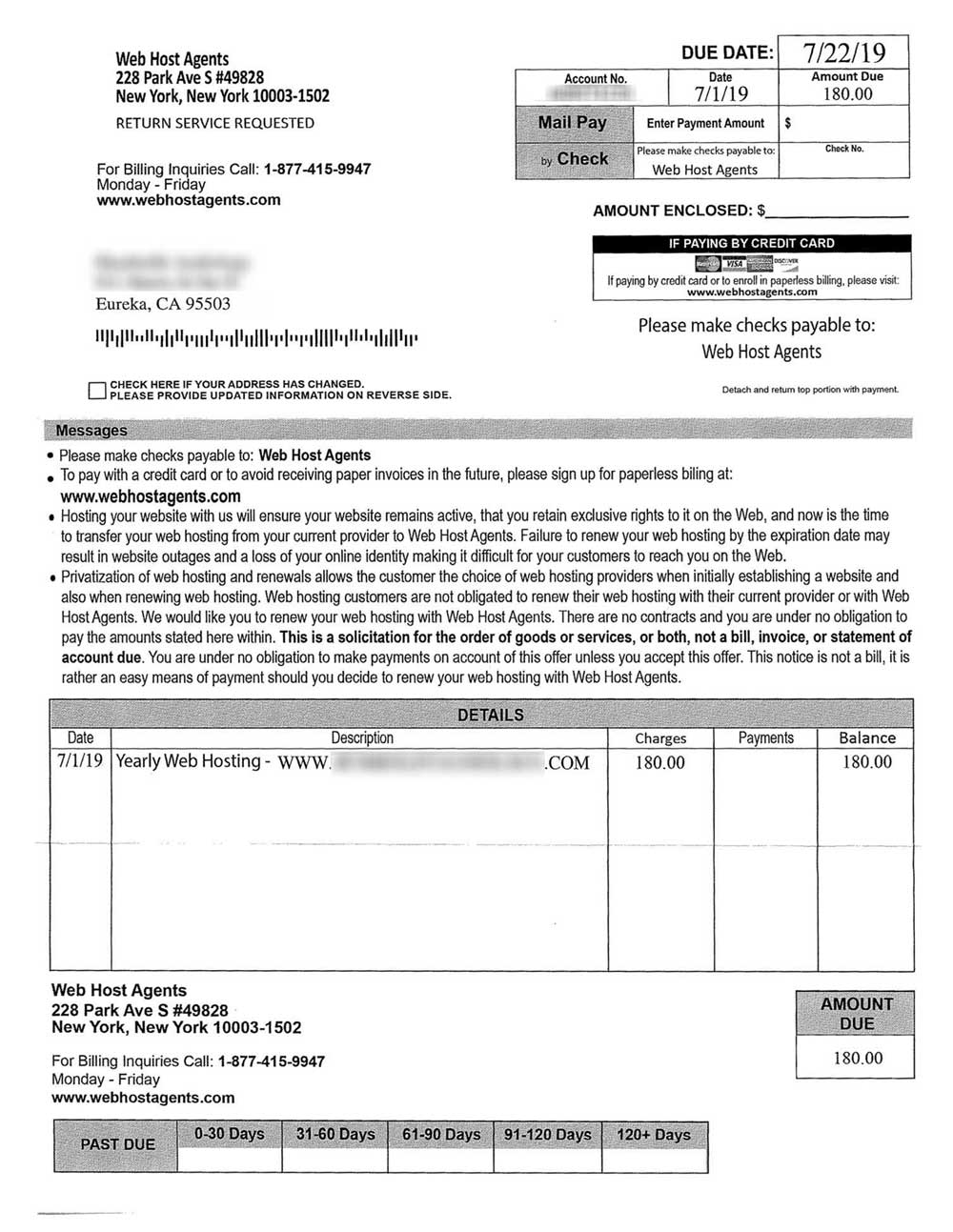 A company called Web Host Agents sends businesses what appears to be an invoice for “yearly web hosting.” At a glance, it does look like an invoice, but buried within the text is “This is a solicitation…not a bill.” One can easily imagine a busy accounts payable office simply sending a check to clear the in-box.

“Hosting your website with us will ensure your website remains active, that you retain exclusive rights to it on the web, and now is the time to transfer your web hosting from your current provider to Web Host Agents.” This may sound legit if you haven’t had your coffee yet. Assuming that they do, in fact, provide hosting, you would need to migrate your site and redirect your domain to Web Host Agents servers.

Our local hosting service, Morse Media posted a warning about a similar billing scam from a company called Internet Domain Name Services in which the headline on the invoice-looking letter warns “Domain Name Expiration Notice.” The scammers know that few business owners can remember which company they leased their domain from, and nobody wants to lose their domain name—the notice looks urgent. They charge $45 per year (“best value: 5 years for $180”), and you’d have to transfer your domain from your current registrar to whom you are likely paying about $10 annually.

Caveat emptor is always good advice, but in this case, the buyer believes that the goods have already been purchased, and they are simply renewing. 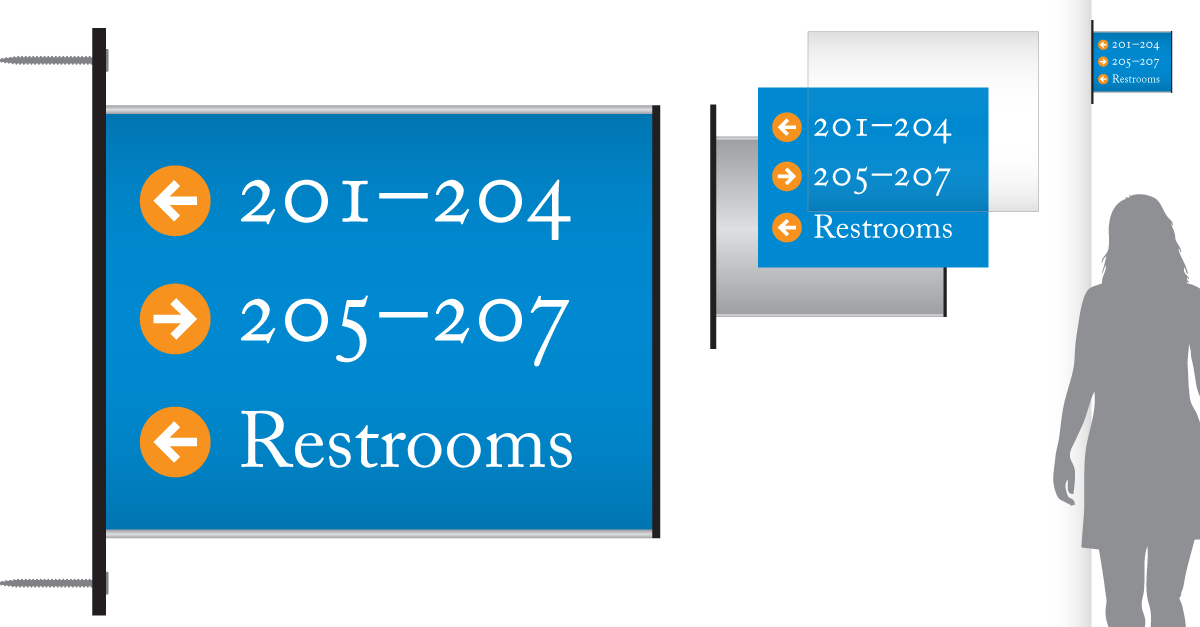 Along with smart-looking lobby directories, we now offer two-sided directionals that can be easily changed/updated with prints from your office copier.

We offer free estimates. Let us know how we can help you. 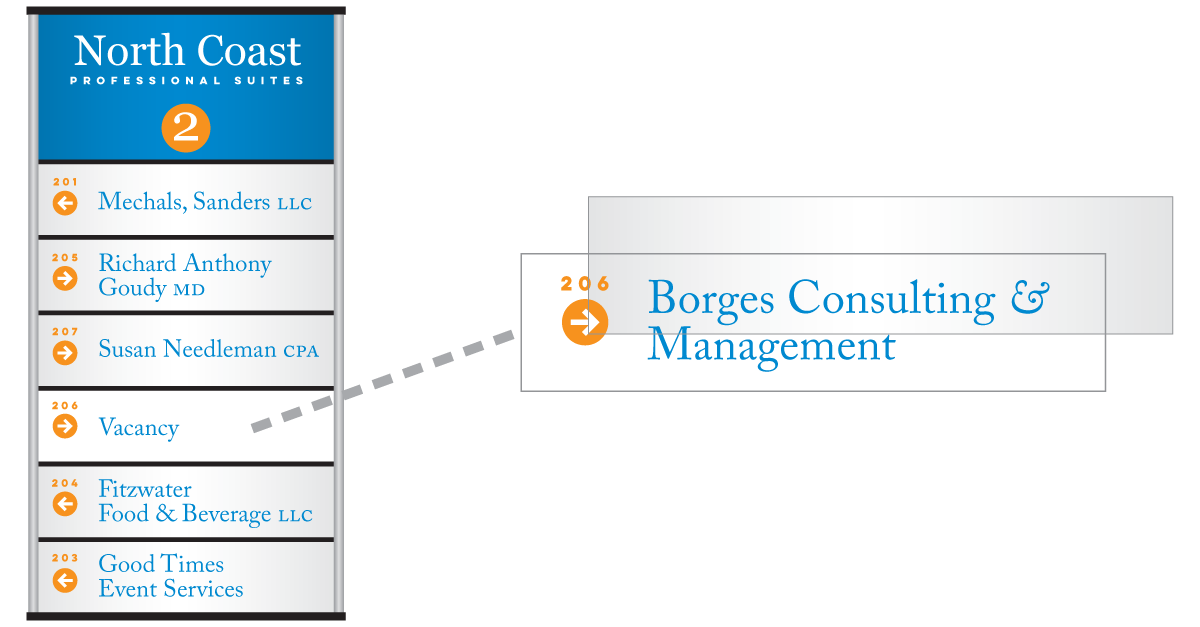 We now offer inexpensive directories and directionals that can be easily changed/updated with prints from your office copier. 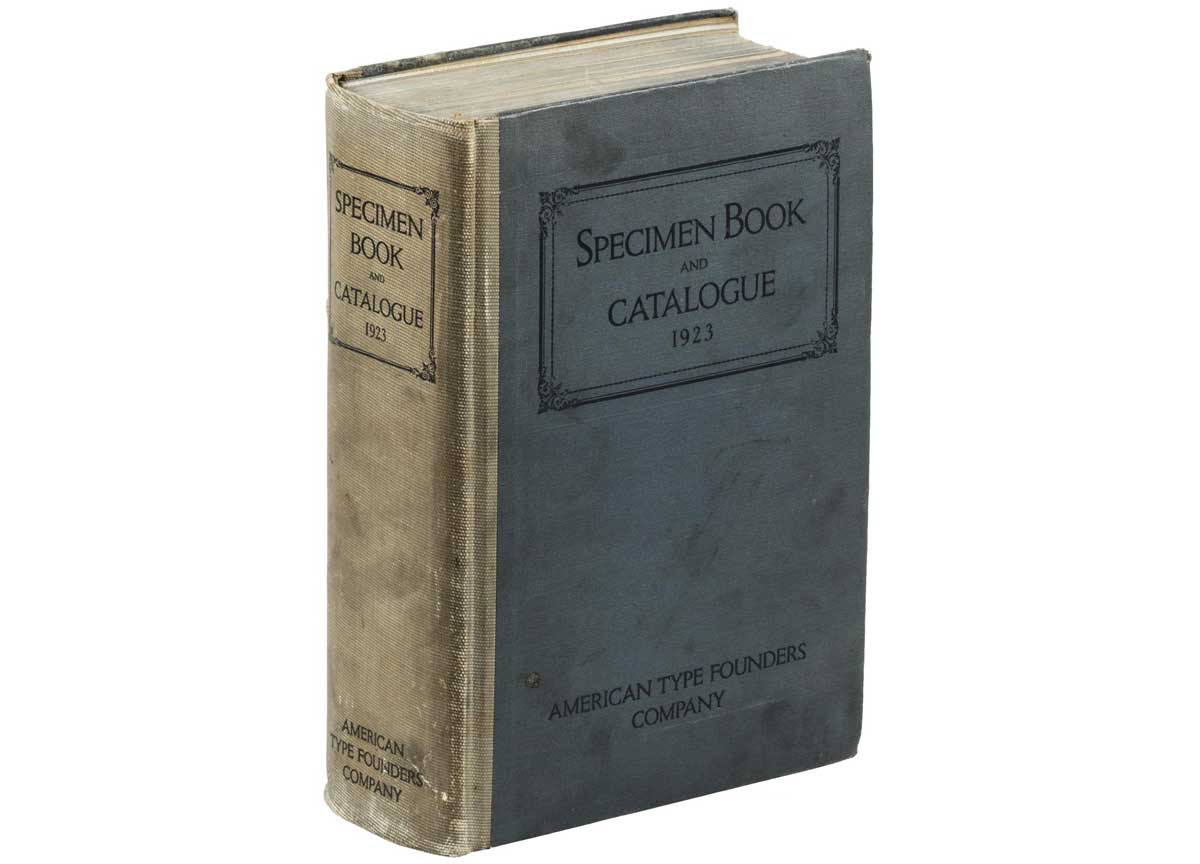 American Type Founders was born of a merger of 23 type foundries in 1892. In the early 1920s, American Type Founders had come to dominate the huge metal foundry type market in the United States. They budgeted a whopping $300,000 (millions in today’s dollars) to produce 60,00 copies of their 1923 Specimen Book. 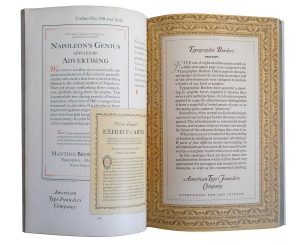 This immense, 1100-page catalog was distributed to print shops across North America. Most surviving copies were referenced for decades by printers with inky fingers, so clean copies are hard to find, and we’ve never seen one in mint-condition. Many copies have illustrations and decorations cut out of the book (probably to be used in a paste-up for an offset project).

ATF finally succumbed, in 1993, to the pressures of “cold type” and offset printing. Luckily for letterpress shops, which have had a resurgence in popularity in the digital age, Mackenzie & Harris Type Foundry, in San Francisco, still produces metal type. There’s also eBay, for metal foundry type.

The Specimen Book and Catalogue 1923 is available occasionally from used book sellers, but you can view the entire catalog on pdf here. 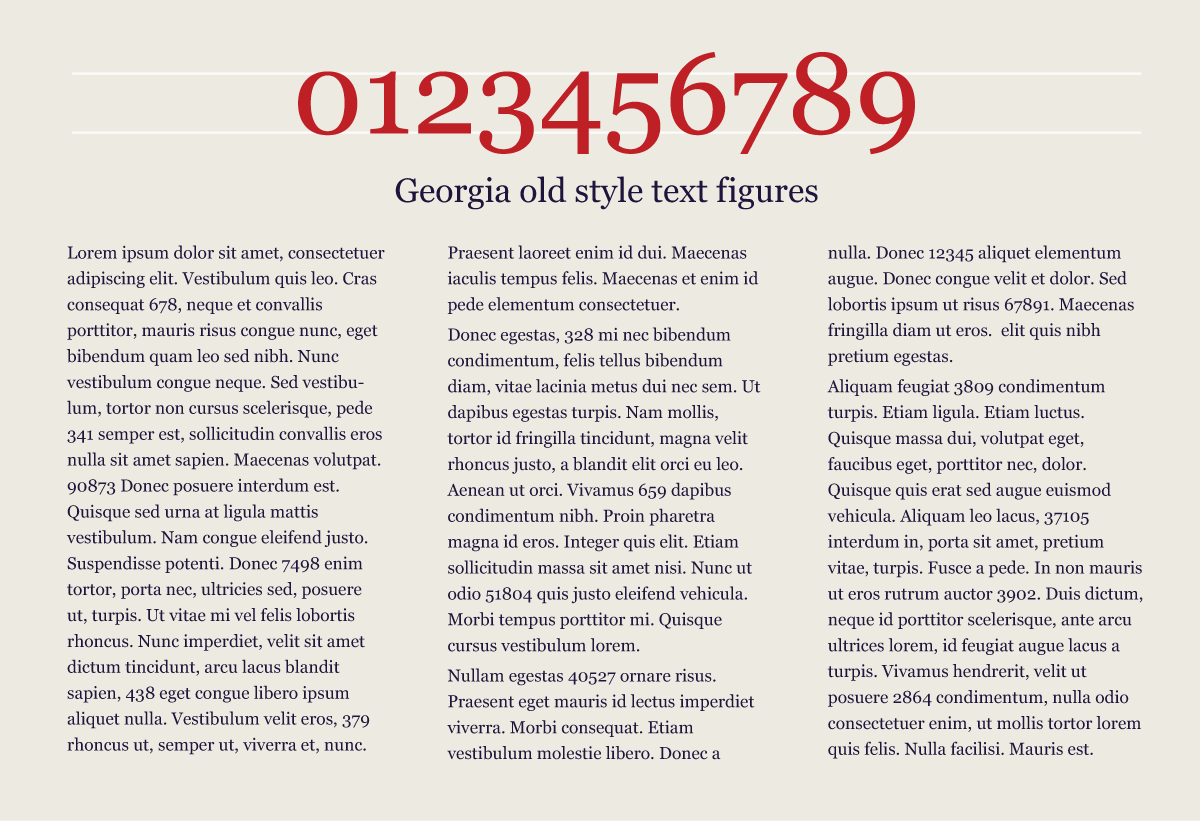 Old style text figures (or lower case, non-lining numerals) have become popular in graphic design in recent years. Typesetters use old style figures mainly in book publishing and magazines because they are lower case and blend into text, but graphic designers have been largely ignorant of old style figures owing in part to the lack of affordable extended type families in the early years of desktop publishing. For decades now, most numerals in text have been “lining” or “modern” figures—essentially all caps.

Matthew Carter designed Georgia in 1996 for Microsoft’s Web Core Fonts program, and it’s now everywhere online. Why?—because it was included (wisely) in the system software for both Macs and PCs. Web designers preferred system fonts for live type (type which is still editable or can be selected/copied—not a static graphic) so that default fonts (think Times and Arial) would not be substituted for screen display.

Georgia, a lovely, highly readable typeface has handsome old style figures, and since Georgia is now ubiquitous, it has renewed interest in non-lining text numerals. Thank you Matthew Carter, and (dare we say) thank you Microsoft.

A thumbnail understanding of Google AdWords and Facebook ads and promoted posts:

Google Adwords: comparable to the yellow pages or classified ads

Google Adwords is search-based. Users are looking for your service or product and AdWords puts you in their search results. The more you are willing to pay per click, the higher you’ll appear in the results. Adwords offers keyword targeting, and allows you to target by location. It also offers negative keywords for excluding clicks that you do not want.

Facebook ads and promoted posts are like mass media—newspapers, television and radio. Use Facebook for upcoming events, to make your brand known, or to promote a candidate or ballot measure. Facebook allows you to target users based on location and demographics, but you are competing for attention in users’ newsfeed.