The italic versions of ampersands are typically less restrained than their roman counterparts. As Robert Bringhurst wrote, “Since the ampersand is more often used in display work than in ordinary text…there is rarely any reason not to borrow the italic ampersand for use with roman text.” This is yet more true for display work and logos.

If a given typeface has a dull italic ampersand (some do), find an exciting alternative in another face (Caslon and Goudy Oldstyle are beauties). Make sure that the thicks, thins and overall weight are compatible with the rest of the type, but a Roman italic can be used stunningly even with a sans serif face.

We recently purchased this 11″ x 17″ sale flyer. Typographic ephemera typically consists of beautiful broadsides from foundries, advertising a new typeface on high-quality paper, but this is a notice of a sale of “secondhand job type” printed on low-quality paper. It was likely distributed to print shops in the region served by the Cincinnati Type Foundry. These faces would have been used in “job printing,” business cards, stationery, etc.

There‘s a mention of the “War of 1861,” so we know that it was printed after the Civil War and before 1892, when the Cincinnati Type Foundry was merged into American Type Founders. View a larger scan of the entire flyer.

The colorful etymology of the ‘giclée’ print

Q: What’s the difference between a giclée and an inkjet?
A: A couple hundred bucks.

In the world of limited edition art prints, giclée is a fancy word for inkjet art prints. There is a difference in quality between the office inkjet copier and a giclée printer, but the term ‘inkjet’ might sound a bit too pedestrian in an art gallery. According to Merriam-Webster, a digital print maker in California coined the term in 1991 after consulting a French dictionary in search of a suitably upscale euphemism. He found the word ‘gicler,’ which means ‘to spray’ or ‘to jet.’

Giclée would have a cachet that ‘digital ink jet print’ couldn’t achieve. Later, printers discovered that in French ‘gicler’ was slang for ‘to ejaculate,’ but the term had by then been widely embraced by North American galleries. Giclée is still in use, but the unsexy straightforward ‘digital ink jet print’ has regained currency and is now the preferred usage.

Here is our type anatomy chart, which was inspired by a similar diagram in U&lc magazine in the early 1980s. Access a high resolution pdf here. Besides typographic parts, we’ve included some sorts that will look familiar to most people, though the names of these characters may not be in common use.

Every year we trundle out the “Gaelic fonts,” for St. Patrick’s Day. Insular (Irish) scripts, or uncials started out as a Byzantine script which enjoyed widespread use, but they are now often associated with the Book of Kells and are viewed as Celtic, or perhaps even less accurately as Gaelic. Uncials are a script form which was developed from Latin cursive during the early Byzantine era (third century) along with the new, smooth media of parchment and vellum. Ascenders and descenders were developed in uncials, contributing to the later development of upper and lower case in early printed Gothic typefaces.

Libra, an uncial face from Bitstream

With the invention of moveable type, upper and lower case blackletter, commonly called Gothic, replaced uncials. Blackletter was perhaps less legible than uncials, and was soon supplanted by the more readable Roman types that are still popular today (“Roman” may be a misnomer in that they were based on the easy-on-the-eye Carolingian Minuscule script). Uncials were quite dead for a few centuries, but they were later introduced as display types for printers in the 19th century for decorative, antiquarian purposes, and now, of course, they are available digitally. Uncials are now so closely associated with all things Irish, that they could be classified as “chop suey” typefaces.

The etymology of uncial goes something like, “from Latin uncialis, from uncia (inch),” but Alexander & Nicholas Humez, in their brilliant book ABC et Cetera: the Life & Times of the Roman Alphabet, offer other etymologies. Uncial also could have been St. Jerome’s reference to either illuminated letters, or to “hooked” letters, depending upon how uncialibus was misspelled by the Saintly Dalmatian.

Either way, St. Jerome had sound advice: Use uncials sparingly. Nowadays, they are more likely to be associated with clovers, leprechauns, green beer, and kelly green “Kiss me, I’m Irish” t-shirts than with mediaeval monastic scribes.

Single primes are used to mark feet, and double primes for inches. They are no substitute for apostrophes and quotation marks—a mistake made even in (shudder) company logos.

The apostrophe, or single closed quote, is used for contractions or possessives. It’s also used as an elision (e.g., “the ’30s and  ’40s were horrible decades for Europe”—the apostrophe stands in for the missing “19”). Some refer to typographers’ quotes as “curly quotes” or “smart quotes.”

A favicon (or “favorite icon”) was the 16 pixel square image that precedes the website title in browser window tabs (see illustration). Favicons are now used for tile and touch icons, iPhones and Android/Chrome apps, so they need to be larger (WordPress likes a 512 x 512 pixel image) so that they can be distributed correctly on different devices and apps. Thumbnail logos, of which browser tab favicons are the smallest, are not legible, so we recommend a simplified logo, or an initial or monogram in the brand color(s). This applies to avatars and social media profile images as well.

Here’s our logo glyph at 75 pixels. It looks appropriate in a tiny browser tab or as an app image. Favicons have become hilariously complicated over the years, but the WordPress solution has made favicons easy to implement for millions of website admins.

Graphic artists often need high quality logos for projects. Go-to sites for corporate logos would be seeklogo.com and Brands of the World, but there’s a fallback method. END_OF_DOCUMENT_TOKEN_TO_BE_REPLACED

“Xmas” has been used in English for centuries. The X is an abbreviation for Christ, from the first letter of Greek Christos. First appearing in English in the Anglo Saxon Chronicle in the early twelfth century, it was spelled with Xp or Xr, corresponding to the Greek “Chr,” thus Xres mæsse meant “Christmas.”

Haliday, a thirteenth century term, came from Old English haligdæg, or holy day from halig “holy” and dæg “day.” The meaning “religious festival” came to be equated with something like “day of recreation.” In American English, “the holidays” are exclusively associated with Christmas and the new year. The religious roots are undeniable, so “happy holidays” is as authentic a Christmas greeting as any other.

Note: Colonial American Puritans banned celebrations of Xmas owing to its pagan origins, and because wassailing and caroling by the hoi polloi encouraged rowdy demands for drinks from more prosperous citizens. Thank Anglicans, Catholics, and Lutherans for bringing Christmas celebrations to America. December 25th began festivities that lasted until January 6 (the Twelfth Day, also known as Epiphany) the big day for balls and festivities.

One plus one makes three 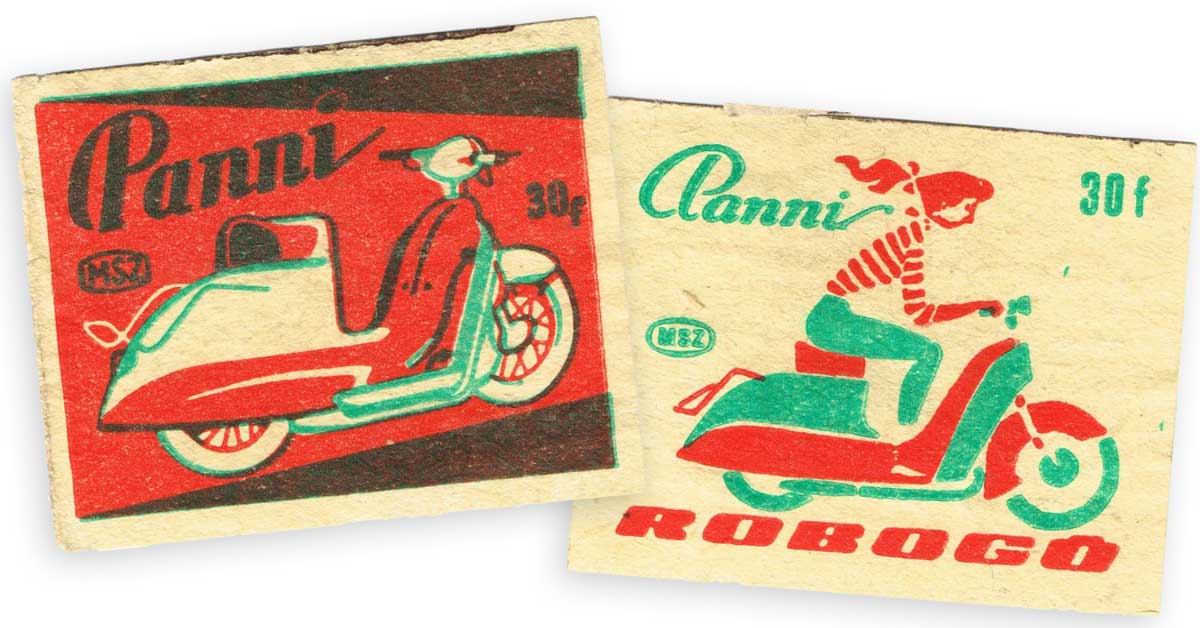 Old fashioned two and three color printing often overprinted spot colors (colors generated by a single press run) to create a third color. Both of these Hungarian matchbooks are two-color press runs of the same red and turquoise green. The print on the left makes use of a third, “black” color by running the red on top of the green (overprinting). 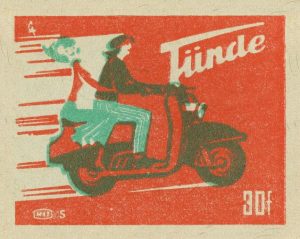 Four color process printing practically makes two or three color printing obsolete, and we know the reasons for this, but there’s a charm to two and three color printing. Skill and imagination were required to make use of overprints that created new colors without additional press runs.