The names sandblasted into the dark granite of the Vietnam War Memorial were set in Hermann Zapf’s Optima. The elegant typeface is tightly leaded in all upper case to stunning effect. The dots that separate the names recall classical chiseled inscriptions. 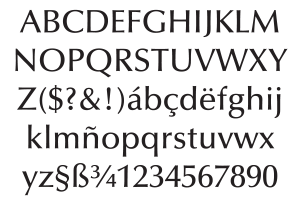 It’s hard now to imagine, but the “black gash of shame” inspired bitter controversy when the design was unveiled to the public. Now, after so many years of  so many hundreds of thousands of visitors finding the lettered granite to be deeply moving, the dispute is scarcely remembered. Names are added with the care that a sacred national shrine would require.

We can all thank Maya Lin for defending her creation from Henry Hyde, James Watt and other flag-waving defenders of mediocrity who would have turned the wall into just another war monument.